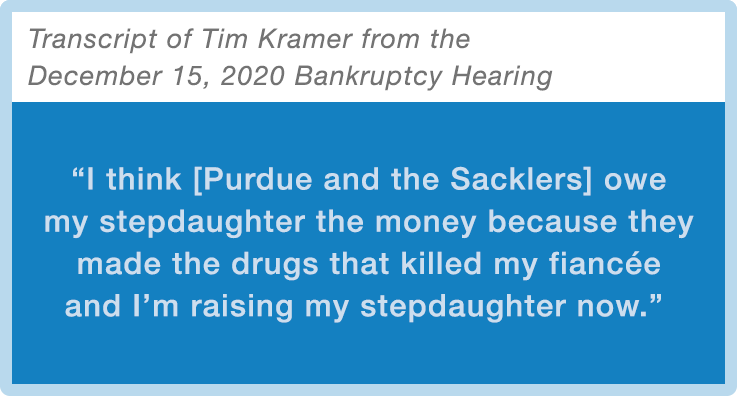 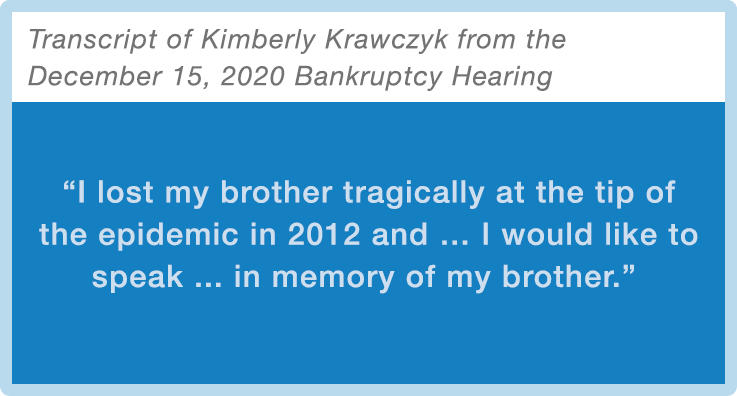 Transcript of Tim Kramer, who lost his fiancée

The Court: … Does anyone else have anything to say on this motion?

Tim Kramer: I don’t know what the motion means. My name’s Tim Kramer. I got a few things I’d like to say. First of all, the corrected notice of hearing—

Tim Kramer: My role is, my fiancée died and I became the guardian of her daughter and I became the representative of her estate and I got this letter in the mail … It says to call CourtCall and so I called them and they said no, call Court Solutions, so I—it was a big fiasco to try to get to this phone call today … I think [Purdue and the Sacklers] owe my stepdaughter the money because they made the drugs that killed my fiancée and I’m raising my stepdaughter now.

The Court: Okay. So, Mr. Kramer, the particular matter that is on the calendar first today is a motion to extend the Debtors’ time, which they have exclusively, to file a Chapter 11 plan. It doesn’t pertain directly to any particular claim in the case. … I guess I can understand your confusion, particularly given that you’re not a lawyer, but this motion really doesn’t directly relate to or address your or your daughter-in-law’s claim in this case. Those claims will be dealt with in a claim review and analysis process, and will be paid in some form—it’s highly unlikely that they’ll be paid in full—but they’ll be paid in some form if they’re allowed, once a plan, a Chapter 11 plan in the case is confirmed. So that’s really what this hearing is about is to, in essence, determine what time the Debtors have exclusively to file that type of plan and dealing with scheduling issues related to the filing and confirmation of a plan. It doesn’t really pertain to individual claims.

The Court: I hope that clears things up for you.

Tim Kramer: Yeah, a little bit. I’m still confused by the lawyer—because I—I’ve got a bunch of lawyers contact[ing] me and I’m kind of surprised that they’re not the ones handling this hearing today. I don’t know anything about this kind of stuff … Should I hang up then, or should I stay on the line?

The Court: You could—either one. Whatever you want, sir.

The Court: You don’t have to stay on the line.

The Court: But if you want to—

Tim Kramer: I’ll just listen to what you guys have to say … I’ll put on mute.

Transcript from Kimberly Krawczyk, who lost her brother

Kimberly Krawczyk: Your Honor? Excuse me.

Kimberly Krawczyk: My name is Kimberly Krawczyk. I did send you a letter at the beginning of the process. I’m a resident of Massachusetts. I lost my brother tragically at the tip of the epidemic in 2012 and … I would like to speak … in memory of my brother. Would you like me to read the letter that I did provide to you or would you just like to just speak in his memory?

The Court: Well, ma’am, I have to say, ma’am, I hold hearings on what is scheduled before me. There are literally hundreds of thousands of people who have lost dear family members because of opioids. I don’t think that this is the proper forum to do this. Again, the courts decide matters that are brought before them and notice for the parties. Your brother’s memory, obviously, is dear and I don’t want you to think that your memory of him and hurt from his loss isn’t front and center in my mind and frankly in the minds of the lawyers and financial people who are trying to resolve this case. … Believe me, we understand, I think, the tragedy that countless families have felt and we simply can’t turn these hearings into something that the law really doesn’t contemplate which is focusing on things beyond what is actually scheduled to be heard, that the parties prepare on, brief, and analyze. So I’m not going to let you speak further on this. As much as I know your words are important, this isn’t the right setting for it.

Kimberly Krawczyk: Okay. I thank you for that but when I did register for this call I believe that … gave me the option to speak.

The Court: Well, but ma’am, that’s largely a mechanical and scheduling matter and it’s assumed—

The Court: —that the people who are speaking will be speaking on the matters that are calendared for that day. …

Kimberly Krawczyk: I see. Okay. My apologies. At some point, I really would like to—

The Court: No, it’s completely—look, it’s completely understandable. I’m not faulting you. You’re not a lawyer. You’ve been through a lot and I want to make sure that—well, let me say this. I think … what we’ve heard from other people, both in letters and in court, speaks for people like you as well.

Kimberly Krawczyk: Okay. My apologies. [At] some point, I would like to speak. He was my last family member and my entire family has been affected through this epidemic and through Purdue Pharma’s family. So I really would like to speak from the pain that it has created and me being left behind with no family. So thank you, Your Honor, for your time and I will just listen. Thank you.